Pandai is an app that offers a variety of pedagogical approaches that support, challenge and engage different learning styles to help Malaysian students (aged 7 to 17) improve their academic performance.

Using Pandai, students have the option to choose their own learning activities, be it self-paced via gamified quizzes and sample exams or synchronous with dedicated tutors. Learning progress and achievements can be monitored using integrated diagnostic tools to identify strengths and weaknesses for students to improve. 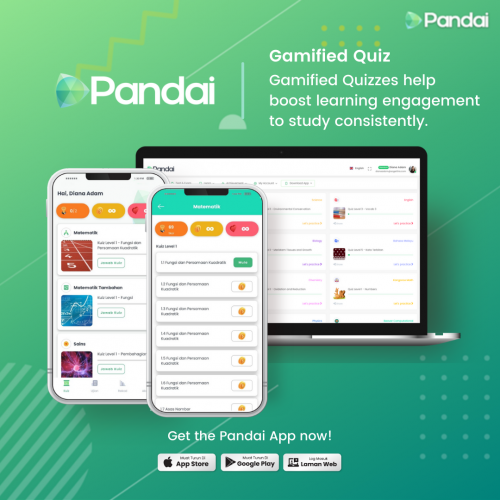 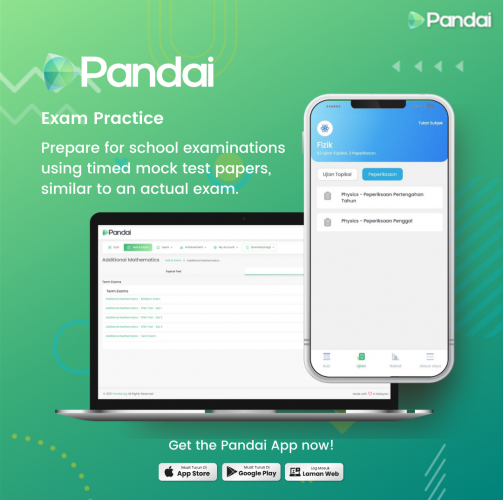 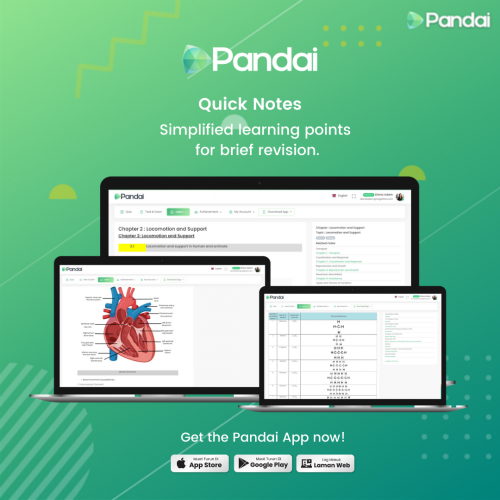 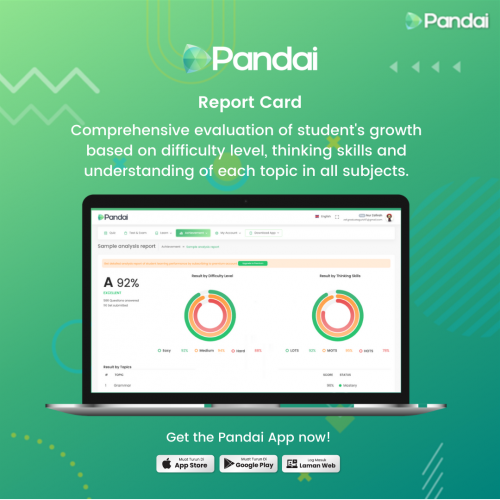 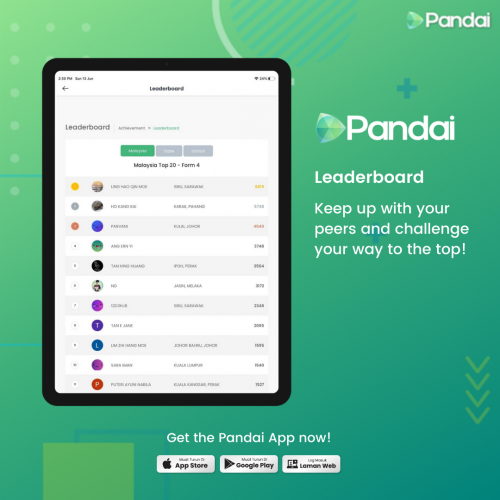 Passive Active
In Pandai, learning is based on active, regular practice. 5 daily questions, streaks, badges and other gamification mechanics keep up the interest and persistence of the student. In addition to the daily questions, the student can also practice with tests and exams related to topics and subjects of their choosing in a set learning path. When answering quizzes, Pandai gives encouraging slogans after every task.
Rehearse Construct
Pandai has fixed learning goals and clear topics. This gives clarity for the students as they know what their learning path is. Learn -part provides good-quality videos and books for independent learning. Materials are quizzed until student gives a correct answer, and the quiz feedback showcases the students very clearly what they know and what they don't.
Linear Non-linear/Creative
The student can follow and assess their success based on the accurate results from the tests. This way the learner gets information how well he/she has learned. It is also easy to schedule the learning progress; students can set personal goals and raise them even higher if they've progressed! The report card on the student side is easy to read, and lists the practiced topics nicely.
Individual Collaborative
Pandai is great for individual revision and practicing. The student doesn't need to share their results with anyone; not even the teacher, if they don't want to. Leaderboard and Competitions provide a small sense of community, and might encourage students who are especially motivated by contests.

Pandai offers extensive amount of content that follows the Malyasian national curriculum.
Quizzing is a good way of rehearsing content the student should know.
The statistics and progress reports in Pandai are very clear and good.

Solve problems involving tangents to circles.
Solve problems involving angles and tangents of circles.
Round off a number to certain numbers of significant figures.
Solve problems involving straight lines.
Describe the locus of points in relation to fixed points, or straight, paraller or intersecting lines hence construct the locus.
Solve problems involving loci.
Perform basic arithmetic operations involving numbers in standard form
Solve problems involving plans and elevations.
Recognise and write numbers in standard form, including common prefix such as tera and nano.
Perform calculations involving simple interest and compound interest for savings, and hence explain the impact of changes in period, rate of interest or return and compounding frequency on the future value of savings.
Perform calculations involving the value of return of investments, and hence explain the factors that affect the return of investments and its impacts.
Solve problems involving laws of indices.
Determine the point of intersection of two straight lines.
Identify the opposite side and adjacent side based on an acute angle in a right-angled triangle.
Perform operations involving laws of indices.
Determine the equation of a straight line.
Determine the values of sine, cosine and tangent of acute angles.
Determine the values of sine, cosine and tangent of 30, 45, and 60 degree angles without using a calculator.
Perform calculations involving sine, cosine and tangent.
Solve problems involving sine, cosine and tangent.
Represent repeated multiplication in index form and describe its meaning
Rewrite a number in index form and vice versa.
Determine and state the relationship between fractional indices and roots and powers.
Solve problems involving angles in circles.
Recognise and describe cyclic quadrilaterals.
Solve problems involving cyclic quadrilaterals.
Calculate the total amount of loan repayment and installment, with various interest rates and different loan periods.
Relate the multiplication of numbers in index form with the same base, to repeated multiplications, and hence make generalisation.
Compare and contrast potential risks, return and liquidity of various types of savings and investments.
Relate electrical energy consumption, power and time by calculating the cost of electrical energy used by electrical appliances.
Conduct a home energy audit of electrical appliances used as a measure to save electricity usage at home.
Communicate about ways of saving electrical energy usage at home.
Justify how innovations and technologies can improve the ability to sense in sensory organs
Define work and solve problems related to energy in the context of daily life.
Relate power with work and solve problems in the context of daily life.
Explain with examples gravitational potential energy and solve problems in the context of daily life.
Calculate elastic potential energy in the context of daily life.
Explain with examples kinetic energy in the context of daily life.
Explain with examples The Principle of Conservation of Energy.
Solve qualitative and quantitative problems involving the transformation of kinetic energy and potential energy in a closed system.
Explain with examples radioactive materials, radioactivity and the concept of half-life.
Describe the history of the discovery of radioactivity.
Draw an atomic structure in a stable state.
Explain the formation of positive ions and negative ions.
Describe ionising radiation and nonionising radiation.
Differentiate the three types of ionising radiation in radioactive decay.
Explain with examples sources of ionising radiation in the environment, natural resources and man-made sources
Discuss ways to manage the risks from exposure to natural and man made ionising radiation.
Communicate about the use of radioactive radiation for wellbeing.
Justify the importance of proper handling of radioactive substances and radioactive waste.
Justify the importance of the Earth’s magnetosphere.
Describe energy sources in terms of renewable energy and non-renewable energy.
Explain with examples the process of generating electricity from various sources of energy.
Differentiate between direct current and alternating current.
Solve problems related to electricity supply in life.
Communicate about the extraction of metals from its ore by illustrations.
Generate ideas on how to solve problems from unplanned mining activities to life on Earth.
Carry out an experiment to build a step-up and a step-down transformer.
Communicate about transformers and the use of transformers in electrical home appliances.
Solve numerical problems using formula involving transformers.
Explain the function of components in the transmission and distribution of electricity by drawing.
Explain with examples electricity supply and wiring systems in homes.
Distinguish between safety components in a home electrical wiring system.
Communicate about safety in transmission and distribution of electricity and the use of electrical appliances.
Define energy efficiency.
List examples of technology that applies the concept of energy efficiency.
Determine the amount of electricity used in electrical appliances.
Explain the structure of the Sun and phenomena that occur on the Sun’s surface by drawing.